Nationally significant flora species recorded at this site include Gilgai Blown Grass, Small Pepper Cress, Dianella amoena and Prasophyllum sp. aff. frenchii an undescribed, endangered volcanic plains orchid. The orchid occurred on the east side of the rail reserve south of Beveridge Lane but is believed to be extinct due to installation of a railway access track.
The Small Pepper Cress population occurred on the west of the rail line 200m south of Beveridge Lane. The plant was found scattered throughout south-east Australia. It occurs now at only one other Victorian site (and several in Tasmania). RFA - Central Highlands Biodiversity Technical report assessed this population as being 0-25% of the Australian population for the plant. The population may now be extinct due to railway works and herbicide spraying.
Dianella amoena plants occur in the Kalkallo Cemetary. (WM pers. obs. Dec. 2004)
A small stand of stony knoll grassland on private land south of Kalkallo Cemetery supports Slender Tick-trefoil of state significance. A number of regionally significant species also occur on the private land and at the cemetery. These include Pussy-tails, Narrow-leaf New Holland Daisy, Chaffy Bush-pea and Smooth Rice Flower. 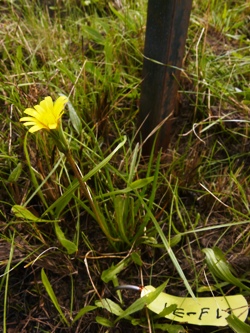 Kalkallo Common has a healthy population of the vulnerable in Victoria species, Plains Yam Daisy (Microseris scapigera) which has been the subject of intensive monitoring by MCMC with the assistance of Victorian National Parks Association NatureWatch program since 2010.
Intensive flora and fauna surveys have not occurred for the rail reserve and creek, this is needed.

This is an important site for the EPBC listed Growling Grass Frogs. The second, of three "focal cluster" population sites (described by Robertson et al 2002) on Merri Creek centres on the Donnybrook Road - Merri Creek crossing and extends along drainage lines west to dams on the west of the Hume Freeway and east to the N-E Railway Line. Ongoing surveys January - present 2003 have located metamorphlings and tadpoles in the section of Merri Creek just north of Donnybrook Road. Despite the serious drought conditions adult frogs are still being found at the various dams and waterbodies in this area (Geoff Heard pers. comm.) check Heard et al 2003
Red-chested Button Quail, listed as vulnerable for Victoria, has been recorded at Kalkallo Common. Many regionally significant species have also been recorded in this area. These include Plains Froglet, Common Spadefoot Toad (a chorus of >100 heard on one survey visit), Cunningham's Skink, Bougainville's Skink and Lowland Copperhead.
Nearby in the Merri Creek the regionally significant fish Australian Smelt has been observed, also Water Rat. The regionally threatened Freshwater Crayfish, Engaeus quadrimanus, occurs in this section of the creek. Nearby stony crests have regionally significant species including Eastern Three-lined Skink, Tussock Skink and Little Whip Snake.
Intensive flora and fauna surveys have not occurred for the rail reserve and creek, this is needed. The rocky escarpment contains suitable habitat for Southern Lined Earless Dragon. The cemetery/common and adjacent private land provide suitable habitat for Striped Legless Lizard.

This site has very high habitat significance and medium faunal significance - it is a site of Regional Biological Significance.
The Kalkallo Common/Kalkallo Cemetery has the most extensive and intact area of Gilgai plain on public land in NEM and one of the most intact remaining on the volcanic plains of GM. It is a representative of a formerly widespread volcanic plains landscape that has virtually been eliminated. It should receive priority protection and conservation management (Beardsell 1997).
The Merri Creek in this site is part of the important habitat link from Bald Hill through to the Craigieburn to Donnybrook site and is an integral component of the Craigieburn Grasslands to Bald Hill habitat link. Maintenance of the habitat link will require conservation management of the streamway and adjacent land. Measures include exclusion of stock by fencing, controls on land clearing and rock removal near the creek. Weed and vermin control, the former done progressively, with woody weeds needing to be replaced by native species to maintain habitat.
Maintenance of these habitat links between the Growling Grass Frog "focal clusters" is essential for long-term survival of this species in the Merri Creek.
The designated Critical Conservation Area of Kalkallo Cemetery and Kalkallo Common and some adjoining areas, requires urgent protection and conservation management. Measures would include cessation of grazing, protect significant grassland on northern side of cemetery from burials, these could occur on the more degraded southern side. Restrict slashing to immediate vicinity of graves. Endeavour to establish and improve a link from this site to Merri Creek by restricting housing, control of vegetation and rock clearing, weed management. Provide incentives to maintain the rocky grasslands and private land and cease pasture improvement land practices.

Threats include: More farmlets, clearing of native areas for Olive plantations, christmas Tree plantations etc.  Slashing and use of the cemetery for graves.