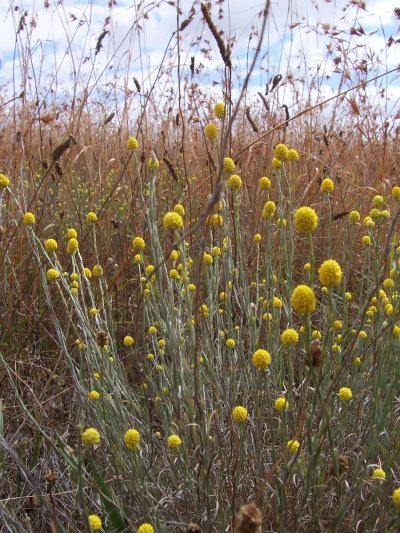 An area of approximately 100 ha of open space along and surrounding Merri Creek between Barry Rd and Cooper St including the 52.6 ha Bababi Marning (Cooper St Grassland) Reserve managed by Parks Victoria. (It is one of four grassland sites along Merri Creek that together form a proposed Parks Victoria park to be called Marran Baba, or "body of the mother.")

Bababi Marning supports two plant species of national significance (Swollen Swamp Wallaby-grass and Gilgai Blown Grass), and three plant species of State significance. DCE (1990) listed 157 native vascular plant species for the grassland.
The endangered White Diurus and Vulnerable Swamp Diurus occurred on grey soils (similar to those at Cooper St and the O’Herns Rd section of Galgi Ngarrk, or Craigieburn Grassland) nearby on the North Eastern Railway reserve at Somerton railway Station until the construction of the standard guage line in the early 1960s (Ros Garnett pers. comm.). The Vulnerable and regionally extinct Leafy Greenhood was a collected along the Merri Creek at Campbellfield in September 1896 by Reverend R. H. Rupp. It more than likely grew in association with the Woolly Tea-tree shrubland on the basalt pavement sections of the floodplain. (NEROC DRAFT – Sept 1992 p. 57)

Overall the area has a high degree of habitat variation, and is of State-National significance for conservation.

The Plains Grassland area is of national significance as habitat for two nationally significant species. The grassland was rated as having State (floral) significance (DCE 1990) and is one of the largest areas of relatively undisturbed native grasslands in the Melbourne area.

The Merri Creek and the River Red Gums along the escarpment are rated as State significance on the basis that the trees infrequently provide habitat for endangered species.

Bababi Marning, together with Galgi Ngarrk (Craigieburn Grassland) and the link between, is listed on the Register of the National Estate (Australian Heritage Commission 1998). The listing was on the basis that the

“grasslands are some of the best remaining examples of the grasslands which covered much of the western basalt plains grasslands in Victoria, a community which is considered endangered in Victoria …..Cooper Street grassland display a high degree of habitat variation as it contains large areas of plains grassland, escarpment scrubland, riparian scrub and red gum plains grassy woodland, a rare and restricted vegetation community in Victoria…..”

“Maintenance of faunal significance depends on management investment. Further fragmentation of the grasslands for factory or residential areas and severance of links to Galgi Ngarrk (Craigieburn Grassland) will eliminate reptile species. Loss of the Striped Legless Lizard could result in a decline to low significance.” (Beardsell 1997 V.2 p.66)

DCE (1990) listed Cooper St Grassland (now Bababi Marning), as one of eight highly significant grasslands in the Melbourne area in private ownership. It recommended investigating its purchase by the government and reservation for conservation.

A small section (22 ha) was subsequently acquired by the state government as a Crown Land Reserve and is managed for conservation. A further 21 ha was added to the reserve in compensation for construction of the Craigieburn Bypass, and the Merri Creek frontage was transferred to Crown Land as part of a deal with the Istra Social Club which owned it as part of the title to their Clubroom area.

Approximately 40 ha of the grassland was lost in 2007-8 to industrial development.

At the southern end of the site there is a stream and floodway zone managed by Melbourne Water. In 2003 a group of wetlands were constructed on part of this site for stormwater treatment.

Strong consideration must be given to acquiring the creek frontage east side adjacent to the reserved land (and linking adjacent sites) from the private owners. In addition to protection of the important species and communities occurring there, and maintaining the habitat corridor - having control of the creek-line is important for protecting the reserved areas from incursions such as the infamous "Jerilderie Cattle Invasion of Merri Creek" of Nov 2002 - late April 2003. (Friends of Merri Creek 2003, p. 4-5)

Private land on which the Golden Sun Moth population has been discovered must be acquired for inclusion in the reserve and appropriately managed to maintain the Austrodanthonia food plants of the larvae.
*Reference Stand: one of the most viable and intact stands representative of its habitat known in GM (Greater Melbourne) (Beardsell 1997 Vol. 1, p. xxv)