This site covers both sides of the Creek from Barry Road south to Horne Street. The Wurundjeri name means "stream waterhole" and it is a biosite of State Significance[1]
The City of Hume owns land on the west side of Merri Creek at the Hatty Court and Bambury Court Reserves. Apart from the Hume Freeway Reservation owned by VicRoads, the most significant parcel of land is the 93 hectare Melbourne Water retarding basin site which extends from just north of Barry Road to downstream of Horne Street and includes land on both sides of the stream. This land was purchased in the 1970s to permit retardation of flood waters. The area is now known as Galada Tamboore from the Aboriginal name meaning creek waterhole.
Perhaps the most outstanding feature of the area is its geology and geomorphology with the Barry Road or Merri Gorge having been assessed as being State significant[2]. Rosengren describes the site as having cliffs, alluvial and bedrock terraces and minor floodplains. The major geological and geomorphological feature is the 15 metre high cliff on the west bank. This cliff exposes an unconformity between the bedrock of Silurian sedimentary rocks and the Newer Volcanic basalts.
While these geological features are essential components of the visual character of the area, they have suffered impacts from inadequately planned nearby industrial development in recent years. Such a development was that associated with an industrial sub-division in the Mason Street vicinity in 1989. Open space was not allocated along the creek frontage and the result has been construction of factories perched close to the escarpment of the Barry Road Gorge. To address such inappropriately planned development, it will be desirable to maintain screening vegetation in the short term and investigate means to acquire key blocks adjacent to the escarpment over the long term.
The Gorge downstream of Barry Road and the Galada Tamboore area has regional faunal significance, and particularly for snakes, is the most diverse site remaining close to Melbourne[3].
A Marbled Gecko was also found amongst crevices in the basalt cliffs and a Lowland Copperhead has also been recorded. Beardsell remarked that the site should be considered of comparable faunal significance to the Cooper Street site to the north, while for reptiles it is more diverse. The discovery of Striped Legless Lizard would raise the faunal significance to State level[4]. Beardsell recommended that an appropriate trapping survey to locate it should be carried out[5].
The site has Woolly Tea-Tree riparian scrub and Kangaroo Grass plains grassland[6]. A significant are of Plains Grassland is associated with stony knolls to the immediate east of Merri Creek[7]. 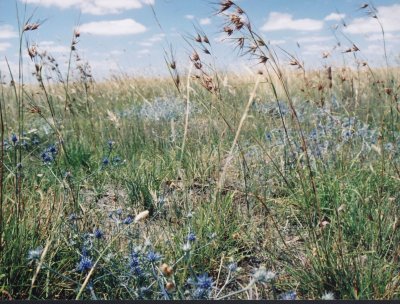 Other areas of grassland are associated with a number of remnants on the Thomastown side of the creek located either on VicRoads or partly on privately owned land. The northernmost remnant (in the area immediately south of Barry Road and along the frontage to Downs Road) has been identified as being of regional to State significance. The southern remnant is located mostly on the Freeway Reservation opposite Pandora Avenue (Carrington Boulevard to Dakota Drive). It has high local to State significance. Both of these assessments were acknowledged to be preliminary[8]. The riverine zone of the Merri Creek valley and associated escarpments were also identified as having regional to State significance[9].
Further flora survey work has also been conducted more recently by Bainbridge (1997). The report confirmed 82 indigenous species over various parcels of land on both sides of the Creek from Barry Road to the Metropolitan Ring Road.
Perhaps the most significant values of the site stem from its archaeological and geomorphological significance. At the time of Hall’s 1989 report the area had eleven known archaeological sites. Since then, one additional site (a scar tree) has been added[10].
A number of these sites are under constant pressure and some have been lost to subsequent development. One example is the largest of the sites in the survey conducted by Hall (1988). It was a diffuse area of approx. 8 hectares which was destroyed through construction of the Mason Street industrial estate. Further survey of the area in March 1997 found no artefacts in association with Site 7822/152 first surveyed by Hall[11]. There is concern that the site has been lost with recent earthmoving[12]. There is also concern that a site on the east side of the creek (7822/161) has almost been destroyed by constant recreational vehicle and trail bike disturbance [13].
However, these problems in no way diminish the archaeological significance of the area or its potential for use by the Wurundjeri community for cultural purposes or its cultural values for the Wurundjeri community, which are partly related to the landscape and natural values of the area.
Beardsell recommended the area between Craigieburn Road East and the Barry Road Gorge (Galada Tamboore) as a key part of the Regional Habitat Link Strategy for North East Melbourne[14].
The Melbourne Water Future Directions Plan for Galada Tamboore identified 44 actions for implementation over a period of up to ten years. The recommendations covered the areas of: waterway management; water quality management; flood management; natural resource management; cultural and historic sites; site amenity and character; and compatible community use. The Plan was developed in consultation with Hume and Whittlesea Councils, MCMC, Friends of Merri Creek and the WTLCCHC. The priority works program will be progressively implemented through a working group of representatives of the above organisations supported by Melbourne Water’s Environmentally Significant Sites Program. A key initial step in the implementation of the Plan is deterrence of unauthorised vehicle access to the site. To this end a number of vehicle entry points will be blocked through cooperative works between Melbourne Water and Hume and Whittlesea Councils. This step is seen as an essential precursor to site boundary definition and protection of the core Melbourne Water owned land.
Supplementing Melbourne Water’s Future Directions Plan for Galada Tamboore has been the concurrent preparation of a site concept plan for Hume Council’s Hatty Court Reserve. The plan outlines future actions for development of the reserve and improvements to its vegetation cover, amenity and recreation facilities (including car park provision). The plan also proposes construction of the Merri Path between Hatty Court and Bambury Court to cater for local pedestrian and bicycle access and link these local reserves. The location of the path will be designed to avoid registered archaeological sites in the vicinity.

In 2004 VicRoads commissioned a report on the natural values of the grasslands on the east of the site in the vicinity of Barry Road[15] The report confirmed the state level significance of the vegetation at the site, and identified weeds as the major management issue.