Another Freeway for Merri Creek?

VicRoads is investigating another major freeway for Merri Creek. The Outer Metropolitan Ring Planning Study shows a new freeway from just west of Werribee, cutting between Melbourne Airport and Sunbury and joining the Hume Freeway just north of Kalkallo.

On 27 September 2007, at Broadmeadows Magistrates’ Court, Onesteel MBS Pty Ltd pleaded guilty to causing an environmental hazard charge brought by the Environment Protection Authority in relation to the discharge of an estimated 3,000 litres of chromic acid from its premises at Cliffords Road Somerton in late October 2005.

The discharge resulted from an overflow of chromic acid when the power and air supply was turned off for the Melbourne Cup weekend in 2005. The secondary containment bund also failed to contain the overflow and the chromic acid entered the stormwater drains. Luckily, it did not reach Merri Creek but was contained in a Melbourne Water sediment basin on the west side of Hume Highway.

Onesteel MBS Pty Ltd has since made appropriate changes to prevent a recurrence of this incident.

During 2007 MCMC has been working with Darebin City Council and a number of other stakeholders to reduce litter in Merri Park, Northcote. Three meetings have been held for people to share their experiences about how they use the park and how they manage to be responsible for litter.

The process has revealed that many park users come from far and wide to participate in seasonal sports competitions, while others are regular visitors, such as students from Northcote High School and nearby residents. By coming together they've become more aware of each other's initiatives in caring for the area.

All stakeholders are preparing to co-sign a Memorandum of Understanding to continue their shared focus and responsibility for Merri Park.

Going out on a Limb to learn about local areas

We’re pleased to announce that The Ian Potter Foundation is supporting a new MCMC program (2007 to 2008) called Out on a Limb. Through this program we will work with eight schools to develop local catchment awareness.

Students will be offered a range of activities during visits to their schools and will also be taken by bus to tour local areas of conservation significance.

Do you ever wonder what MCMC is doing about climate change? Planting thousands of trees for carbon uptake? Like everyone, we have considered how we might change our work to minimise carbon dioxide levels. MCMC is purchasing wind generated electricity, ensuring energy efficiency is maximised and many staff ride to work (see photo of the Ride to Work Day 2007). However, our strongest impact on mitigating the effects of climate change may result from doing what we have always done: revegetation and restoration of remnants along Merri waterways.
Improving habitat corridors will strengthen the resilience capacity of the wildlife populations and help flora and fauna to survive in a rapidly changing environment.
In spring, Merri Creek parkland’s role as a habitat corridor becomes very apparent. September saw the return of summer breeding species such as Brown and Rufous Songlarks, Cuckoos (Horsefield’s, Pallid and Fan-tailed), White-winged trillers, Rufous Whistlers and Olive-backed Orioles. Birds on passage to breeding areas further south such as the Blue-winged parrots were noticed following the open spaces. Also, inland birds seek refuge from drought during spring, including White-browed Woodswallows. We are likely to see more birds seeking areas of relatively moist environments where they can survive until conditions improve.
Along the Merri, habitat corridors are usually strengthened by establishing as much of the original vegetation cover as is practical. Habitat corridors can also be strengthened by providing habitat refuge in the urban surrounds. Consider the following to make your garden a welcoming ‘stepping stone’ for travelling wildlife:
· Migrating and vagrant wildlife are at increased risk from predators as they will be unfamiliar with safe hiding spots. Providing dense shrubberies that can provide refuge from local birds of prey is helpful for the vulnerable visitors.
· Cat containment can also make our suburbs less hostile to moving animals.
· Planting indigenous plants that foster plentiful insect life is very important. Gardens dominated by nectar-bearing Grevilleas, gums and Banksias will encourage an over-abundance of tough resident Honeyeaters that give migrant species a hard time.

Versatile indigenous species that will foster insect life and look great in the garden include Sweet Bursaria, Tree Violet and Lightwood. These also provide blossom, berries and seed in summer when migrant species are often present. 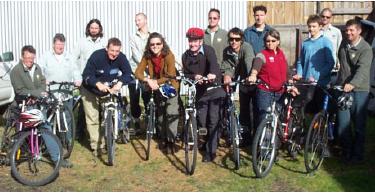