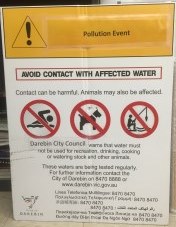 Three separate fires at industrial premises threatened Merri waterways during January/February 2017. One resulted in serious impacts on Edwardes Lake in Reservoir. The Merri Catchment includes significant industrial areas and the risk of fire runoff polluting Merri Creek is of increasing concern. We are grateful for the prompt and skilled response of Melbourne Water teams in managing the runoff from these fires. Nevertheless, it's time for a hard look at how to effectively protect our waterways from the threat of pollution from industrial areas, whether from fires, accidental spills or illegal discharge.

Edwardes Lake
Edwardes Lake is on Edgars Creek, a major tributary of the Merri, and has important recreation and habitat values. In late February Darebin Council, Melbourne Water and the EPA were kept busy managing managing pollution in Edwardes Lake Reservoir, following an industrial fire at a soap factory in Thomastown on 11 February.  A few weeks after the fire, heavy rains washed pollutants downstream from Edgars Creek into Edwardes Lake. By 21 February dead fish were turning up in the lake and strong odours were evident. Control works involved containing the pollution and removing soap scum. Darebin Council crews disposed of over 100 dead fish (carp) and later a number of dead waterbirds, the latter most likely affected by botulism. The fish are preumed to have died because of low oxygen levels resulting from the action of the pollutants. Some residual pollutants are likely to remain in the Edgars Creek and lake system for some time. Fortunately these are mostly organic substances rather than nasty toxicants, but nonetheless retain the potential to release nutrients that stimulate algal growth. This can then use up oxygen in the lake, especially in warm conditions when there is little flow. Darebin Council is continuing to monitor and test the lake's water and we are very grateful for efforts.

Special recognition should be given to the Reservoir Frogs Waterwatch group who detected extremely high levels of phosphate in Edgars Creek upstream of Edwardes Lake, two days after the fire, a clear warning of potential problems to come. This Waterwatch group is supported by MCMC’s Waterwatch Coordinator.

Merlynston Creek
Runoff from a large fire at a recycling factory in Coolaroo on 28 February threatened Merlynston Creek, another tributary of Merri Creek. Fortunately the potential for runoff was well managed and there was no pollution of the creek or the lake downstream in Jack Roper Reserve, Campbellfield.