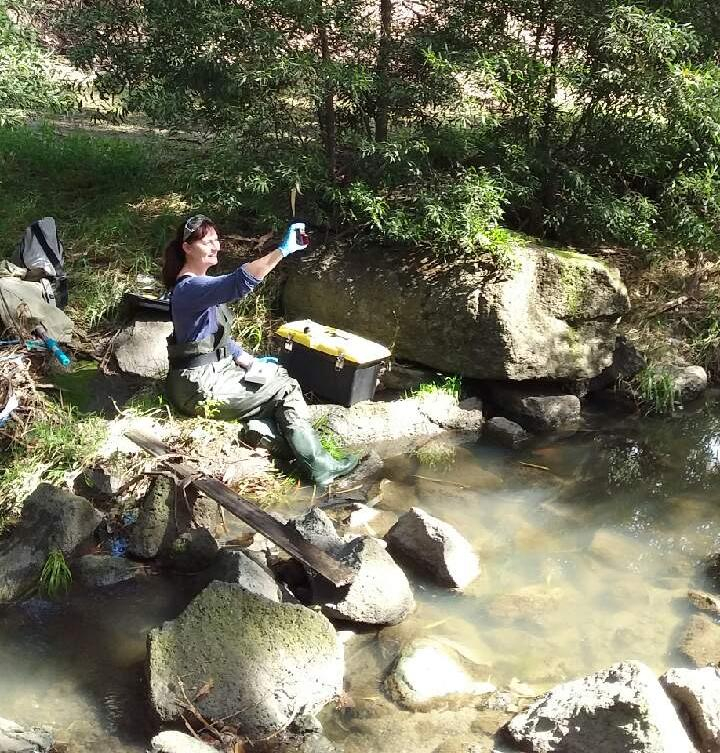 Sediment samples have been collected from Five Mile Creek in Essendon and sent off for testing as part of the fantastic Pesticide Detectives program. The positive news is that, as with the results from Merri Creek late last year, there were no pesticides found in the sample.

The nation-wide citizen science project is a collaboration between volunteer citizen scientists and RMIT University’s Aquatic Environmental Stress Research Group (AQUEST). The program is investigating the occurrences and concentrations of pesticides in Australian waterways. Pesticides found in our waterways include those used in homes and gardens, as well as the pesticides used in agriculture.

It was the third round of sampling, in a series of four 'sampling blitzes’, carried out across the country. The results from the first three rounds can be found here. For the second round of testing, in late 2019, Merri Creek Management Committee (MCMC) collected a sediment sample from Merri Creek, just south of its confluence with Edgars Creek in Coburg North. More information about that visit can be found here.

Sediment samples are used when looking for the presence of pesticides as many pesticide molecules bind to sediment particles. In order to take a sample, volunteers wade into a deposition area of a creek or river where sediment particles accumulate. Using a trowel or shovel, a sample of the top 2cm of silt (fine sediment) is taken. The samples are then sent to AQUEST for testing. The research group look for the presence of 110 pesticides.

Owing to COVID-19 restrictions on volunteer sampling, this most recent round was carried out by MCMC’s WaterWatch & Rapid Response Litter after Rainfall Coordinator Julia Cirillo (pictured).

Whilst there were no pesticides were detected in the samples taken from Five Mile Creek, that doesn’t necessarily mean that there are no pesticides present in the creek. The negative results could be owing to several other factors. Pesticides may not have been present at that particular spot on the creek owing to water flows, or pesticides might not have been absorbed by sandier/coarser sediment. Also, although the list of 110 pesticides is extensive, new pesticides are being regularly created.

Previous studies have shown that there is widespread contamination by synthetic pyrethroid in waterways across Melbourne.

In the third sampling blitz, pesticides were detected at 8 out of 79 sites (10%). This comprised of two sites in both Victoria and WA, and at one site in each of ACT, TAS, SA and QLD.

The pesticides detected in Victorian waterways were Iprodione, at Reedy Swamp, and Bifenthrin at the mouth of Barongarook Creek. Iprodione, already banned in the E.U., is a fungicide that is used to control a wide variety of crop diseases by inhibiting spore germination. Aside from also inhibiting other beneficial spore germination, it has been found to induce Leydig cell tumours in rats. Bifenthrin has been found to be very highly toxic to aquatic organisms, along with being toxic to mammals, bees and birds. It is a synthetic pyrethroid that is used is many home, garden, agricultural and commercial pesticides. It remains present in the environment for a long time and has the tendency to accumulate in organisms.

The results from the fourth sampling blitz will be published asap.