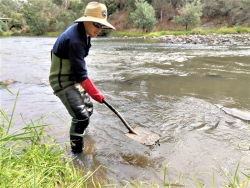 The ecological effects of pesticides in waterways is being explored as part of an exciting new citizen science project called Pesticide Detectives. This federally funded program is a collaboration between RMIT University and citizen science volunteers.

As part of the project, Merri Creek Management Committee (MCMC) collected a  sediment sample from Merri Creek, just south of its confluence with Edgars Creek in Coburg North, in late 2019. The good news is that no pesticides were found in the sample.

Many pesticide molecules bind to sediment particles in waterways which is why sediment is collected. Sampling involves wading to a deposition zone in the river or creek where fine sediments accumulate. A trowel or shovel is used to obtain a sample of the top 2 cm of fine sediment (silt). These samples are carefully packaged and sent to RMIT where they are tested for the presence of 110 different pesticides. In September and October 2019, 63 sites were sampled across QLD, SA, NSW, VIC and the ACT.

Of the sampling done in in that period, a total of eight sites tested positive, with findings including:
• Aldrin / Dieldrin – an organochlorine insecticide which has been banned since 1997.
• Bifenthrin and Permethrin – synthetic pyrethroid insecticides
• Tebuconzole – a broad spectrum fungicide

The negative test result for Merri Creek may mean there is no pesticide contamination, which would be fabulous! However, it could also mean that pesticides may not have adequately adsorbed in the sediment to show up in testing. Alternatively, pesticides may have been absent at the specific sampling location, but are present in other parts of the waterway. Furthermore, not every single pesticide on the market has been tested for. We know from other studies that contamination of wetlands by synthetic pyrethroid is widespread in urban Melbourne, including parts of the Merri.

Two more rounds of Pesticide Detective surveys are happening across Australia in February and April 2020. This will include re-checking sites found to have pesticides in 2019, and possibly upstream and downstream testing to assist in the determination of potential sources of these contaminants.

For more details on the specific results see: https://pesticidedetectives.com.au/sampling-blitz-2-sept-oct-2019-results-2/
MCMC is looking into the possibility of further participation in this citizen science program. With the support of Moonee Valley City Council we recently took a sediment sample at Five Mile Creek in Essendon, for analysis by the Pesticide Detectives Program.
Thanks to Melanie Halliday and Kate Ward who provided much of the material for this article.