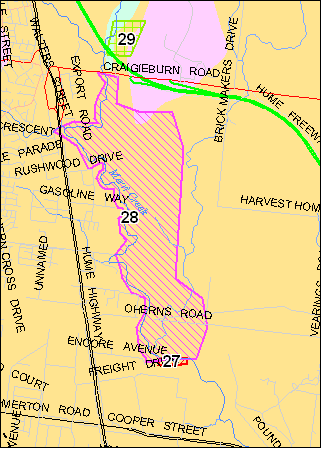 A large site including the channel and an irregular area on the left bank of the Merri Creek south of Craigieburn East Road.

SITE DESCRIPTION: This site has diverse topographic and soil patterns and has a complex geological and geomorphological history. It lies immediately south of the Silurian inlier of Summer Hill and the Merri Creek flows along the western margin of a lava flow from Hayes Hill. Ridges and rocky hummocks are separated by flat areas with significant gilgai micro-relief. The low hills and ridges are stony rises, originally areas of rugged surfaces that have been subdued by weathering. Gilgai are a phenomenon developed in soils with substantial component of clays that swell when wet. Here they are in the form of roughly circular mounds up to 1 m in diameter with rims 30 cm to 40 cm high. The soils of the gilgai areas have been described by Frood (1993).

The Merri Creek valley has distinct alluvial and bedrock terraces and a series of cliffs and bluffs marking the edge of the inner valley.

This is an area of complex terrain and soils. It has been relatively little disturbed in comparison with adjacent similar sites which have been quarried, cultivated, drained or otherwise physically altered. It is a clear example of a weathered stony rise and illustrates the character of the originally rugged topography of the flow surface. Gilgai phenomena are uncommon in the Merri Creek catchment as most have been modified by agriculture or construction. The site is a good location to show the geomorphological variation of the valley including the incised rocky channel, old higher level channel and different types of terraces.

CLASS 1. The gilgai terrain is a subtle topography that is sensitive to disturbance, particularly by cultivation or construction. Gilgai soils also pose a problem for construction due to their shrink-swell potential. Road and building location need adequate site investigations to determine possible soil hazards. 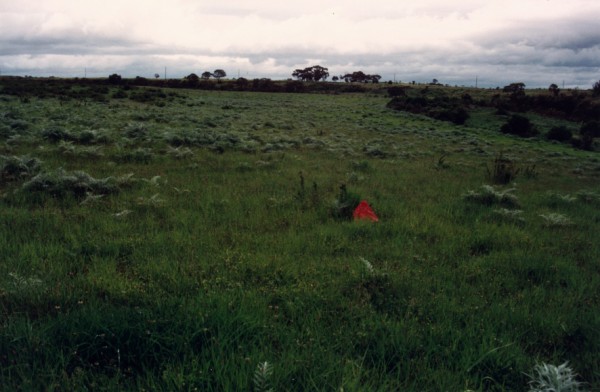