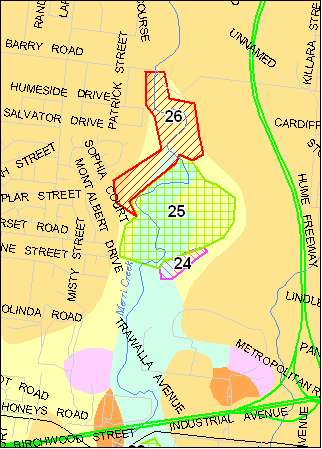 ACCESS: Unpaved vehicle tracks from either Main Street, Thomastown (eastern access) or from Somerset Road, Campbellfield across a ford of Merri Creek.

SITE DESCRIPTION: The site is the eastern slope of the Merri Creek valley here cut into weathered pale-coloured Silurian mudstone overlain by weathered basalt. Overlying this material downstream is a thick, stratified alluvial deposit containing small calcareous nodules. The creek flows in a shallow channel at the base of the slope and is eroding and undercutting the alluvium. The lower horizon exposed just above creek level has an extraordinarily high slaking and dispersal index. Outcropping and scattered along the slope are boulders and pebbles of a massive grey-white rock. The rock has been analysed by X-ray diffraction and fluorescence by Dr. R. Boesen (La Trobe University College of Northern Victoria). It is rich in dolomite, with less than 3% silica by weight and is not a chert as indicated by Hall (1989). No definite in situ material can be seen but it is likely that the material lies between the basalt and Silurian. Detailed petrographic and analytical studies of this material are proceeding at UCNV.

The massive nodular material described above has some similarities with that at SITE 4 on Edgars Creek. It is (or was) abundant at the surface and would probably have been available to Aboriginal people. Given its composition and structure, it would not be a very suitable tool-making material.

The extensive exposure of alluvium is also of interest in the context of the development of the broad alluvial basin south of the Barry Road gorge. The alluvium is stratified and of varied composition. Many horizons contain highly dispersable clays.

CLASS 1. Use of the area by trail bikes and other vehicles has severely degraded the slope and is causing the nodular material to be dispersed. There is currently no practical means of reducing this impact. If it continues, further erosion and degradation of the site will continue. Hall (1989 noted that only one implement fashioned from this material has been found in the area. This not surprising given the composition and texture of the material.

Boesen and Rosengren (in prep.) 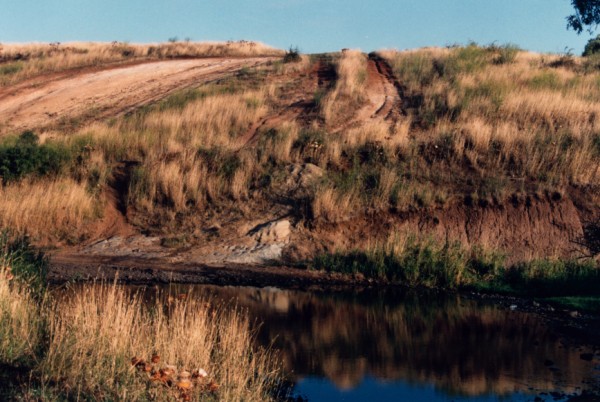 Photograph 35B. Dolomite nodules exposed at eroded surface of Site 24.