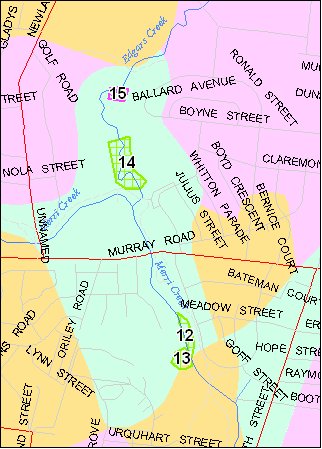 SITE DESCRIPTION: A small outcrop of basalt about 10 m x 10 m in area just above water level displays a roughly symmetrical jointing pattern forming a tessellated pavement. The pavement is formed of irregular elongated polygons (joint blocks) with 5, 6 and 7 sides. The joints are contraction cracks formed as the basalt was cooling and their elongation indicates the flow to be still moving as the joints were forming. The direction of axial elongation of the polygons indicates that the basalt was initially moving in a NNW to SSE direction as it was cooling (following the ancestral course of the Merri Creek), This trend may have reversed later as the flow backed up a tributary of the Merri Creek along the alignment of the present Edgars Creek.

The upper surface of many of the polygons of the pavement has a marked concavity. This feature (known as "ball and socket" jointing) may result from original curvature of horizontal joints but on exposed surfaces it may be initiated or emphasised by chemical weathering as water collects in depressions on the pavement.

This is a very clear example of a common feature of massive lava flows and is the best example of this type of jointing forming a tessellated pavement in the Metropolitan area. The site can be used to illustrate how the direction of movement of a lava flow can be determined.

CLASS 1. The pavement is a robust surface and can withstand the pedestrian traffic associated with excursions. The blocks are firmly interlocked and there is little risk of them being deliberately removed. However, as the site is small it is at risk of being covered by vegetation growth and litter from adjacent willow trees or by flood-borne debris or sediment. Inadvertent actions such as channel engineering or footpath construction should be prevented by the management authority being aware of the significance of the site. Intervention by the management authority may be necessary to maintain the site as a significant geological exposure. 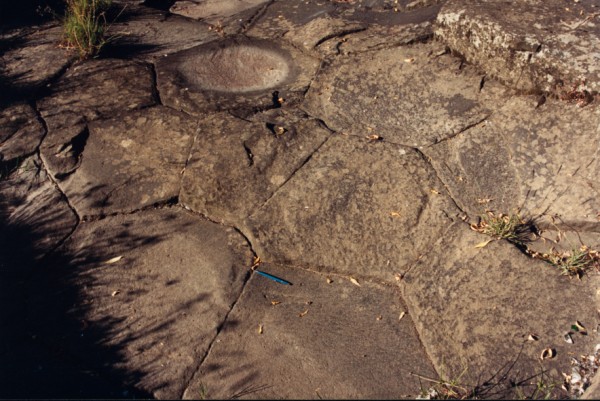 Photograph 19 "Ball and socket" jointing in basalt at Site 12.