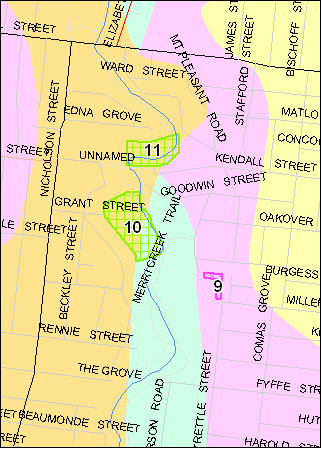 Vertical cliff (quarry face remnant) on two sides of the tennis courts at the southern end of Halwyn Cr. at the eastern side of the A.H. Capp Reserve, Preston.

SITE DESCRIPTION: The cliffs are the remaining faces of the large clay quarry that occupied this site. They form an "L" shape around the northern and eastern sides of the tennis courts and provide two excellent sections, at different angles, into dipping Silurian sedimentary rocks of the Melbourne Formation. Differences in lithology, as well as bedding, jointing, weathering and small thrust faults are very clearly displayed. Fractures and some beds are enriched by rod-brown limonite which contrasts with the original pale colour of the sediments. The true dip of the beds is uniformly towards the cast-south-cast as the site lies just east of the axis of the Whittlesea Anticline, one of the major fold axis of the Silurian rocks in the Melbourne area. Because the cliffs provide adjacent sections at right angles, the true dip (i.e. the real dip to the E-S-E) is seen only on the northern face, while the eastern face shows an apparent dip to the south. The sedimentary rocks are cut by two small decomposed dykes.

This is an excellent section of the Silurian sedimentary rocks of the Melbourne district. Many of the exposures of these rocks are in road or rail cuttings and access is often hazardous. By contrast this is a recent, clear and clean section that is always safely accessible. Its open nature and westerly aspect mean that the rock faces are well illuminated. It is an excellent site for geological study of the composition, deformation and alteration of the bedrock of the Melbourne area and for illustrating true and apparent dip. It is the best locality to see one of the small, decomposed dykes that are common in the Melbourne, Formation.

CLASS 2. As the site is a relatively recent exposure the features are fresh and clear. The main threats are from natural deterioration, vegetation growth and visitor pressure. This mudstone deteriorates relatively quickly on exposure and some flaking and spalling is already apparent and small talus piles and fans are accumulating at the base of the cliffs. The faces are easily damaged by climbing and geological hammering. The closeness of the tennis court fence interrupts the view of the faces and hinders photography. These exposures should be managed as significant geological features and given priority over other forms of land use in the area.

Note: This site was destroyed in the late 90's by filling and landscaping. 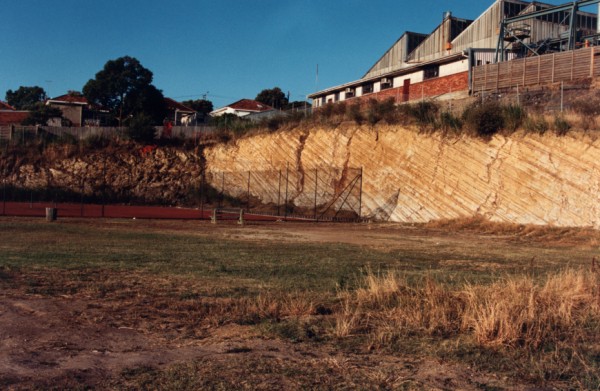 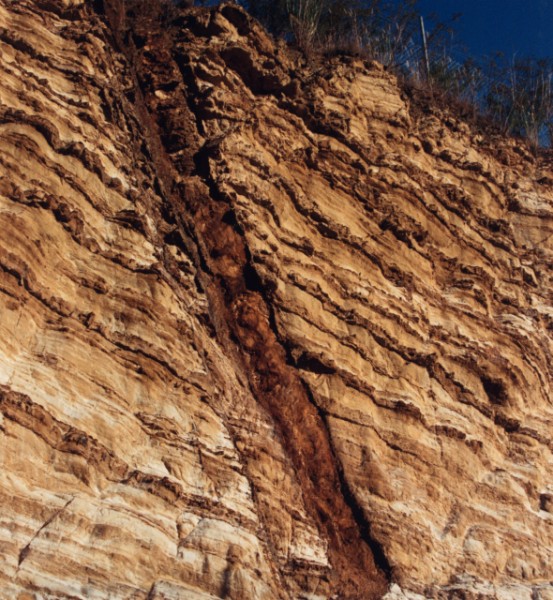