Immediately upstream of Dights Falls by the Eastern Freeway crossing of the Merri Creek.

SITE DESCRIPTION: At the confluence of the Merri Creek and Yarra River, a deltaic deposit of clay, silt, sand and gravel has extended the course of the Merri Creek into the channel of the Yarra River just upstream of Dights Falls. The ponding of water by the falls reduced the velocity of the current of the Yarra River and deltaic growth occurred as the faster moving waters of Merri Creek slackened and sediment was deposited. The natural delta was of digitate form and consisted of parallel "silt jetties", with the eastern jetty" being a prominent narrow extending for about 300 metres. The delta has been substantially modified by road and bridgeworks of the Eastern Freeway. The meander of the Yarra River into which the Merri Creek debouched has been truncated by these works and the linear deltaic form has been lost. Much of the apparent "deltaic" deposit at the site is actually artificial fill although pebbles of basalt and Silurian mudstone and sandstone in the creek channel illustrate the hard rock geology of the catchment of the two streams.

This is a very disturbed site. Although a small deltaic form can still be discerned, the context of the site has been lost as a result of the Freeway engineering works.

CLASS 3. This is only a partly natural site and the sensitive elements have been substantially altered due to channelisation of the creek and the road and bridgeworks. The major attribute of the site is that it forms a natural platform to view the outcrops of Silurian rock at Dights Falls.

REFERENCES: None are known. 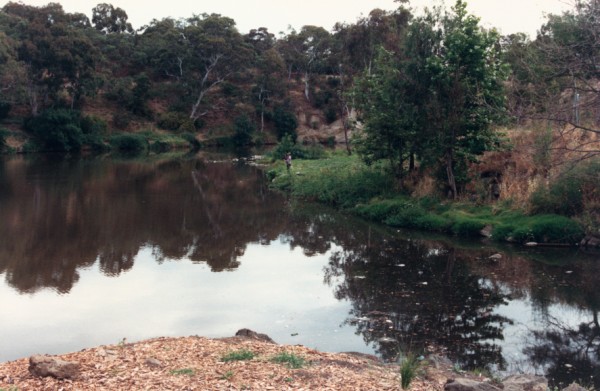